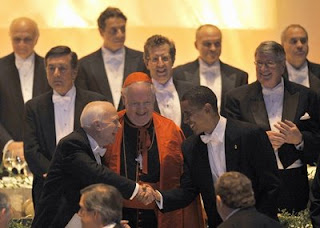 In 2004, the Al Smith Dinner did not invite the presidential candidates because one of them was a pro-choice Catholic. But, this year, the tradition returned: white tie and tails, the Cardinal-Archbishop of New York presiding, and both presidential candidates yucking it up. Best lines of the night were John McCain's joking that “I can’t shake the feeling that some people here are pulling for me. I am delighted to see you here tonight, Hillary” and Barack Obama's attempt to correct the record: "Contrary to rumors you have heard, I was not born in a manger. I was born on Krypton and sent here by my father Jor-El to save the Planet Earth."
Posted by Writers and Friends of America at 4:31 AM